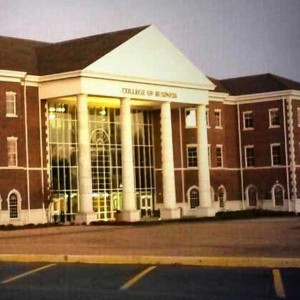 Domain names and the domain business generally mean little to college students. It’s a fact I’m trying to change as a member of the University of Central Arkansas College of Business faculty. My new position as Executive in Residence offers me the opportunity to talk Domains, Websites, ICANN, .buzz, all you other guys, etc. to my hearts content with the millennial crowd. Generally, by the second half of the semester students start ‘getting’ how cool our business is.

Not missing a gift presented to me, I gladly introduced Buddy to students on Wednesday, the day after GoDaddy was taken to the social woodshed over their new Super Bowl TV spot.

This crowd of 68 twenty something’s across two classes did not match the statistics of yesterdays blood bath which eventually led GoDaddy CEO Blake Irving to issue an apology and pull the ad. Quite the contrary. Only a couple were familiar with the social upheaval happening the day before class. While 40 liked, 16 hated and 12 didn’t care— whether they liked or hated — an overwhelming majority of students disagreed with GoDaddy’s decision to pull the ad, feeling the company had cowered and given in to a relatively small group of protesters. Students were in general agreement the ad should run on Sunday, and if anything is required of GoDaddy an apology to those offended will suffice.

As I allowed the students to discuss the ad they offered up the following:

With younger viewers, those likely to start a new business, the ad works.
Air it, GoDaddy always pushes the boundaries.
Commercials are make believe. This is funny, with a surprise ending. I will remember this ad.
GoDaddy should admit their mistake. Give us a ‘To Be Continued Note’ and follow up with a happy ending.

A couple of students noted their disdain for Gabby’s, “whatever I can sell, I will sell,” attitude in shipping Buddy off and not showing any attachment to the puppy.

“She didn’t even make an effort to find him”, one student lamented.

Others pointed out Buddy was obviously special to Gabby as she recognized him immediately by calling out his name upon his return home.

“She’s sending him to a nice place.” they concluded.

A number of students agreed the story is obviously not finished with one suggesting Buddy has one more obstacle to endure – riding with Danica Patrick to his new home.

Your assignment. Watch the Super Bowl, be prepared to discuss what happens to Buddy. See you Monday.