What domain experts do for .fun

Some new gTLDs will cause massive chaos/confusion…

It seems that at least once or twice per week, over the last couple of month’s, that clients will e-mail and ask me directly “Mike! Which soon to be released gTLD’s are the best??!” so in other words, what’s investment worthy. Well, there is a bunch of them that obviously stand out from all the rest such as .web, .shop, and so on… But these soon to be released “domainer favorite” new gTLD’s are going to stir up some massive confusion and chaos along the way, once launched.

I bet you .shop and .store are going to be confused all the time by users, and vice versa. Same with .web, .site and .website… That one is going to be a nightmare if all 3 gTLD’s are operated by 3 separate registries. It’s just going to be disastrous for the fellas who setup a new website on only one of the new gTLD’s and don’t secure the other gTLD variation/s. We’re probably going to see traffic leaks and spill-overs like we’ve never ever seen before, even with .net and .co for example spilling over to the all too popular king com. 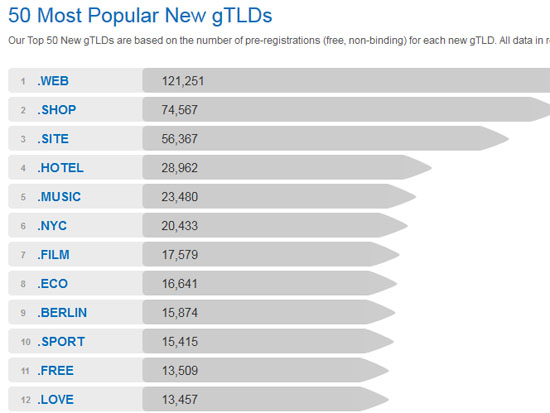 According to UnitedDomains.com — These are the most popular new gTLDs based on the number of pre-registrations (free, non-binding) for each new gTLD that has been applied for

So at this point in time, I am still not 100% sure which new gTLD’s exactly are going to end up the sure bet winners down the road. There is so many variables that are going to come into play once these new gTLD’s are launched… Makes you dizzy just thinking about it all and how things may turn out espanolviagra.net.

There is going to be a lot of factors to consider before investing in any of these. Even the best of the best, which are already being cheered on by many industry insiders as the next big thing 100% money makers. Don’t believe the hype! Stop, and think it all through.

Sure, the likes of .web, .site, .shop, .blog, .app and whatever may very well take off at first and generate lots of buzz… But it’s all just too damn early to call at this point as far as what is going to make a good investment and what isn’t. I remain neutral on the case as far as all new gTLD’s go. Not leaning either way.

Still tons and tons of of information to process, and many steps to get through before we are where we need to be in order to make a proper and an informed decision that will then naturally follow-up with money being spent, hopefully wisely. Lets be thankful for this gap… Gives us plenty of time to strategize accordingly.